I just wanted to let you know about Bella's condition. Although she is far from OK, she is getting constantly better.

Last time I blogged, her eye was closed and he abscess got a bit smaller. Well, since then her eye got a bit worse. She opened but it was bulging. It was scary. The vet told us (well, not me, Nick spoke with the vet), that it's normal. All the puss in the abscess has to find a way out, and that way was through her eye. OH MY GOD!!! GROSS!!!

Now her eye is closed again, but it's not wet or swollen. I dunno, she might lose the eye after all, we just have to wait and see. I am not particularly concerned if she ends up with one eye. We hamsters don't really use our sight.

The abscess is getting smaller all the time, but now as fast as we would have hoped. Given this rate, it will take weeks for the abscess to vanish. Bella hasn't lost her appetite. In fact she eats more than ever and she is getting very very chubby. She doesn't exercise though. She must be very tired.

Oh, the antibiotics. Bella already consumed her first bottle of antibiotics. We will have to call the vet again and ask advice. Should we continue the treatment? We are concerned that this much antibiotics can't be good for her immune system. Nick did some internet research and found out that she has to eat some yoghurt. Something to do with digestion and antibiotics. Complicated stuff. At least Bella loves yoghurt. She makes a mess of herself when she eat it though. It's very funny.

Well, as soon as Bella gets well, Nick has promised free cinema tickets for all of us!!!

Of course, all this time, I have been very naughty. I managed to make Nick angry by destroying a favorite household item of his and I have managed to find a new hiding spot. TROLOLOL!!!

But more about MY adventures (instead of Bella's medical condition, in my next blog post!)

Hello, this is Joshua the Hamster blogging from Athens, Greece.

I would like to talk to you about Bella.

Bella is my new friend. She came to our house 2 months ago, just a little bit before Christmas. When Nick got her from the pet store, they gave him a little box for the transfer that was made out of paper. Nick had to make a short visit to the local convenience store to get some presents for Christmas. Very short stop, no more than 5 mins. By the time he got back in the car, Bella had eaten her box and was exploring the passenger's sit.

He put her in my mother's old cage that was prepared in advance.The journey from the pet store to our house is stressing for new hamsters. And we also don't like changes. So she was let alone in her new days for a couple of days without distractions in order to get used to it. Bella was easily frightened and for little reason. Bella was very shy and she was scared easily. When she heard loud noises she would wake up and cry! She made a little voice, much like a human screaming 'waaaah', that made Nick feel bad for waking her up and scaring her. But her scream was funny too. Bella got used to human voices after a day or too!

Bella was shy. That's why we don't have many pictures of her. She would also never stay still, which made taking pictures of her even more difficult. This is her only photo we got of her. 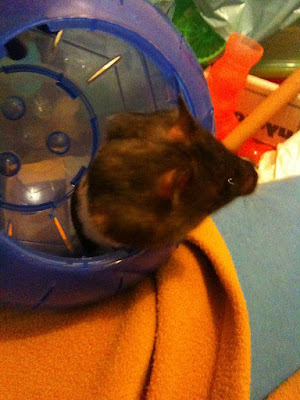 She is not very pretty, but she has a heart of gold. She loved eating sunflower seeds and peanuts. Nick would leave a few in her cage at first, and later, when Bella became more bold, he would let her take them from his hand. She wasn't allowed to roam free in the house because she had the bad habit of biting and chewing the cables. So, she spent a lot of time in her blue hamsterball. The one pictured in the photo. I used to run behind her, and she would try to run over me, with her ball. Fun times.

What? Oh, no why would you think that? Of course she is not dead!!!

I am using past tense because she is very sick right now. But she is getting better. You see, two weeks ago, she developed a mild eye infection. She wouldn't open her right eye. Nick didn't pay much attention to that. After all this is very common to hamsters. My mother used to do this all the time, and then after a while, usually the next day, her eye would be OK.

Alas, this was not the case with Bella, next day it was worse. Also, for some reason, she started making weird noises with her nose. Perhaps the infection, or the tears from her eye, caused her respiratory problems? That was Saturday, two weeks ago. Come Sunday, she begun breathing irregularly. Nick couldn't take her to a vet at Sunday. They had to wait until Monday.

So, once he got back from work, he put her in her hamsterball and drove to the vet. It was an adventurous journey for many reasons. First, because he had no idea where the vet was. Second, Bella was scared and Nick had to drive slowly and avoid bumps. Which is impossible if you drive in greek roads. Once he reached the vet, it was almost closing time. But they made it in time.

Bella, escaped from her ball, once they were inside the vets office and started running around her office. When they caught her, they put her on the surgical table (but they didn't perform any surgery) and the vet started examining her. Bella was scared, and -hehe, this is funny- she pooped the vet. That was when Nick noticed a HUUUGE cat on top of one of the vets shelves. He was the Vet's cat. He had this look, like he was the owner of the place, and everyone else was under his command. He just stood there, watching.

The vet weighted Bella in order to judge how much antibiotics to prescribe. She told him to give her the antibiotics (once per day) and eye drops for the eye infection (thrice a day). The antibiotics would help cure the infection and breathing problems and prevent pneumonia. She also said that Bella had to visit her again next Friday. That was when the cat had had enough, and jumped from the shelve on to the vet's surgical place and started sniffing Bella. Bella almost fainted. 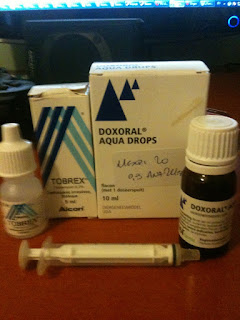 Nick started administering the antibiotics and the eye drops to Bella, but with great difficulty. Bella refused to take her medication. She even started screaming like she did the first day she got home. She hadn't screamed since then. Nick was giving a desperate fight in order to make her drink the antibiotics, but she would try to escape from his hand. However she didn't bite him. Even when she got really scared and started screaming. After 30 minutes of failed attempts to force feed her the antibiotics, Nick gave up. However he succeeded at a later time. Hoorah!

Her breathing problem vanished the next day, which was very good, because it was causing Bella to snore while sleeping. It may sound funny now, but if you were there, hearing her, it would make you worry too. However, her eye infection did not get any better. In fact it got worse. Her eye was now constantly closed and swollen. And then her nose started getting bigger too.

On Friday, Nick visited the vet again. This time they didn't put Bella into her hamsterball, but took her cage with her. The cat was there too (along with 2 more cats), and all of them were curious about Bella. They even climbed on her cage. I am not sure if Bella noticed them. She was very tired with the infection and the administration of antibiotics, and her eye was closed shut. The vet examined Bella again. She said that her nose was big because of the abscess or something. She said she had never seen an abscess so big before. This worried Nick a lot, but the vet reassured him that it was nothing to worry about. She told him to increase the dosage of the antibiotics to twice a day, instead of just once.

Three days have passed since then. Bella's abscess now has gotten somehow a little smaller, but she still looks like a rhino! Her eye is still closed, and she sleeps a lot. However, it's encouraging the she still has her appetite and drinks water regularly.

I hope she gets better soon, because I miss chasing her in her hamster ball.

I am Joshua. I am a hamster. Nick is human and he isn't even aware of the blog!

My name is Joshua. I am a hamster. I write this blog using Nick's computer. Nick is a human. He doesn't understand hamsteralk. I do understand humantalk. Nick doesn't know that I use his computer, and I only blog when he is not paying attention. That is what my father, Monty, used to do, and I wish to continue his legacy!

Now that we have this cleared, there is another controversy that I want to settle.

I am a MALE hamster. Ok? MALE!!! I am not Bella. I am yellow colored. So, on the previous post, stop saying 'Oh.. Bella is beautiful, she has nice nose'. It's me. ME! ME! That is my nose! I talked about Bella, but I haven't posted pictures of her yet. She is new here and we don't have enough pictures. She is sick right now. When she gets better I will use Nick's camera and then I will post those pictures here.

Lastly, I would like to thank Inky for featuring me in her blog. Her hamster, Rory, is beautiful!

Bye for now, going to run on my wheel,

Wow, it's February already? I can't believe it was December last time I wrote on this blog. I blame Bella for not posting so often.

What? You don't know Bella? Oh I forgot! I haven't introduced her to you.

You see, during Christmas, Nick and Ira decided to give me a present. And the present was Bella! Bella is a shorthaired female hamster. She has lots of colors. She has black patches, white patches, brown patches!!! Nick and Ira got her because they thought she was ugly and they felt bad that she was going to have to spent her Christmas in a pet shop. But humans don't understand hamster beauty like us, hamsters.

We are good friends, Bella and me! Bella is a quiet hamster. She likes to eat, and generally Ira says she acts just like my mother, Maza, did. Perhaps all female characters have the same temperament? Nick and Ira let her out of the cage a few times, but only briefly. Because when they let Maza out of the cage, she had the habit of biting the cables. Guess what. Now Nick and Ira have one less USB cable because of Bella, and Bella is not allowed free in the house, like I am. Oh well.. 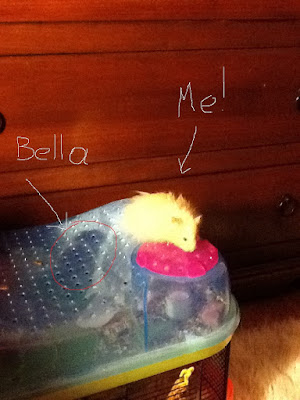 One of my favorite activities is spying on Bella. When she is asleep, I climb on her cage and start peering inside. Sometimes she seems me and this freaks her out. She goes crazy and starts running all over her cage. It's very funny! Nick and Ira say I am a little devil. 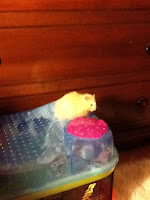 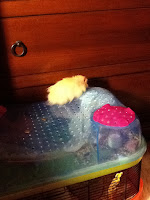 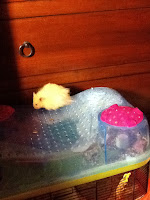