Hello, this is Monty!

It's very hot here in Athens! It's unbearable.

Due to the heat, me and Maza sleep in the open. That is, inside our cage, but not inside our little houses. Nick saw that, and now he leaves the air-conditioning on 24/7! The first time he did that though, it was TOO COLD, and we went inside our houses and insulated ourselves with tissue paper like we did in the winter!

But what is more important is that we got one of our boys, Iggy, with us!!! Nick's friends went for vacations, so they sent Indy here for us to take care for a month. He is very happy to see us, and so are we. Me and Maza gave Nick some hamster-euros and Nick ordered a Nintendo DS (hacked). We gave it to Indy as a present. I tried to find a rom version of Pokemon Fire-Red (Iggy's favorite game). I had some trouble configuring DS acekard to ran a GBA rom, but in the end I made it! This is a picture of installing the Pokemon GBA rom on a Nintendo DS (using EZ Flash 3-in-1). 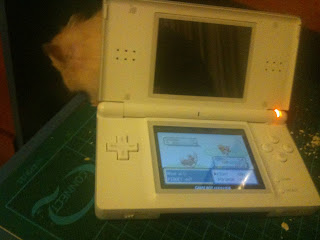 Indy liked his NDS.  Too much in fact. Then, I noticed that he was sleeping a lot.. hmmm, teenagers these days... 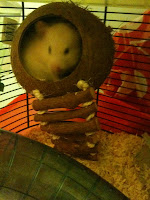 Like the concerned father I am, when he was out playing in his hamsterball, I had a chance to spy in his room. I was sneaky. I didn't want Indy discovering me. Nor Maza, she would say I was a silly-dad, an overprotective one. I didn't want Nick afinding out either, because he would take photos of me and laugh with their friends. Well, I failed the last one. Nick took pictures of me after all. I will post them here first! This way I will have the last laugh. Or the first? D-oh! You can see Maza on the right, observing me and making fun of me. Grrr.

Anyway, here is my gallery (you can even call it a graphical guide) on how to invade other hamster's cages. Observe my agility and my climbing skills.

Anyway, I found disturbing evidence in Indy's cage. I found food. A lot of food. JUNK FOOD! Sleeping and eating this much junk food cannot be healthy. I sneaked into his cage and waiting until Nick left. I didn't like him taking pictures. This was top-secret stuff. I waited and waited, and when the coast was cleared I confiscated all the junk food. My plan was to move all this food into my cage and destroy it (by digesting it). I stuffed as much junk food as I could in my cheeks. I started making my stealthy escape and then BAM, Nick got into the room with his damned camera. BUSTED.Then I tried to leave his room and deposit all this unhealthy food in my cage. But I didn't want anyone to find out. Unfortunately Nick did! He even took some photos of me because he thought I was funny. Stupid Nick, I will have my revenge soon.

Afterwards was time for exercise. I instructed Iggy to enter his hamsterball and start running. 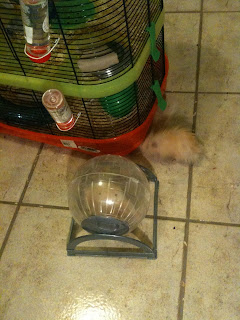 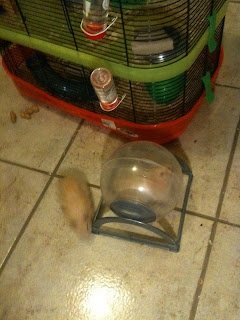 But all this running around made ME hungry, so I decided I needed a break from watching Iggy. Next stop, Quakers! 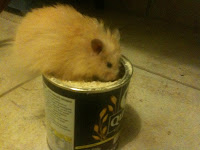 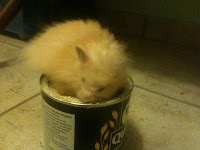 I am in trouble!

I managed to escape from my cage three times in a row. But now Nick is watching me carefully. They even put me in a maximum security cage with cctv (webcam actually) so they can observe every movement I make.

Here is how it went down.

I managed to lift the top of my cage, got out and started walking up and down the corridor. Nick saw me, but he wasn't alarmed. He does let me out on his own as well, but before he goes to sleep, he picks me up and puts me back in my cage. NOT THIS TIME HAHAHAHA.

This time I brought some food on me and hid myself. He thought I was hidden under some furniture in his bedroom, so he sealed off the rest of the house until the next evening. He knows that I would wake up eventually and would start patrolling the house.

But I was smart. I was hidden in the living room, inside the sub-woofer. Too bad I was sealed off the PC room. That's where my cage was. That was also were my water supply was located. I got thirsty. I will not make the same mistake again.

The next morning they found me. Or so they think. In fact I let myself be found, because I was thirsty.

I managed to lift the top of my cage again and started walking up and down the corridor. I was very lucky because Maza was there too. I started climbing on her. Nick saw me again and was furious at me. He started yelling about 12 more hamsters in one month's time. I have no clue what he was talking about. The put me back in my cage.

This time, they left me roaming around the house. I hid. They thought I was hidden inside the sub-woofer, but I wasn't there. Nick was afraid I might get hungry. He left some cheese on the bedroom floor, thinking I would come out, pick it up, and he would spot me. But I waited until he fell asleep.

Next morning, when he woke up, the cheese was missing. He didn't like that I tricked him and was angry. He started moving furniture around. I let myself be found again. I also adopted a sad face. I am a good actor. Nick put me in my cage again.

Then he realized that I was escaping from my cage because the PC room was very hot, so he moved the cage into his bedroom that is air-conditioned.

Maza, for the love of hamstergod, STOP EATING!!!

Did you reach Australia through that hole? Any buried treasure? Can you breathe? Hello..? Oh my god I think she is stuck. BRING THE JAWS OF LIFE!