Humans love me too much some times.

Yeah, I know you love me guys, but come on! You are suffocating me. Jeez! Holding me all the time is annoying. Especially when I got food in my mouth. So, stop doing it! My evil eye is on you!!! Nick is playing games on his PS3 so I managed to sneak into his room. I am using his computer now, heheh.

Ok, last time I told you about how I got to know Maza better. And how we played together. Well, after a while she became snobbish again. I don't know if it had something to do with my 'acrobat' tricks, but I think Nick blamed me for Maza's snobish attitude.

She wouldn't talk to me, she wanted to be left alone and sleep all the time. I wanted to play together with her, but she wouldn't leave her cage. And she was always eating. She even started to get fat!!! Nick and Ira were giving her tissue paper so she could make a big nest. Why did they encourage her snobbish behavior?

Nick awas happy at first, and they even said that I was the father. Nonsense! How could I be the father??? I didn't do anything naughty! But then Nick became worried. There were too many baby hamsters. Including me and Maza, we were 14 hamsters and only 2 cages! We had to get more cages, and later we would have to find people to adopt the babies.

Here are some pictures of the babies. Hm, they do look a little like me... 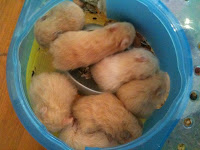 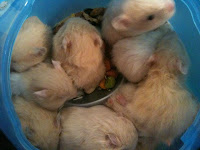 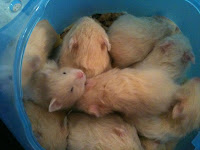 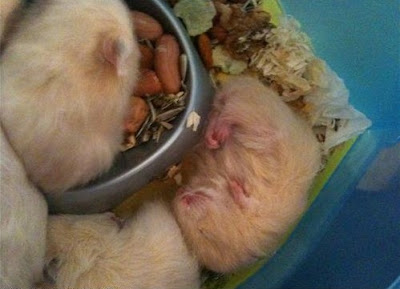 We let Maza take care of the small hamsters until they were old enough. Maza was stressed. She thought there was very little food in her cage and every time Ira gave her food, she always took it. She had filled her house with sunflower beads, peanuts and corn, but she would always pick up more food. I felt a little bad, because Maza took the whole burden of raising the babies, and I couldn't help her at all. Poor Maza, her babies exhausted her. They were always milking her, and she couldn't rest, not even for a minute. There was a time where Maza collapsed in the middle of her cage. Nick was scared. He thought that she died. But she was just exhausted and sleeping.

This is a video of Maza trying to escape her cage because all those baby hamsters drove her nuts!!!

When the baby hamsters grew up and they could eat on their own, Nick had no choice but to buy two more cages. He put the male hamsters in one cage, and the females in another. It was funny because they made a mistake. One boy hamster pretended to be a girl, because he wanted to be with the girls. Exactly what a rogue like me would do. Clever boy. I guess I am the father after all!

The little hamsters grew up very fast. Some were white like Maza, some where golden like me. And some had white and golden patches. They were very funny. Some hamsters are going to be long-haired and some are going to be short-haired, but it will take a while for their fur to grow. Nick found homes for all of them, and gave them away. I am afraid I am not going to see them again. This made me sad but Nick promised me that the owners will sent pictures of my kids! And he occasionally tells me stories of their adventures.

Also Maza is getting fat again... but I didn't do anything. I promise!!!

Got to go. Maza is calling me because she feels lonely.

Monty, the fatherly figure.
No comments:

It's time for a quick update. I got some more old stories to write about. I want to get those stories out of the way, so I can start writing about the more recent stuff.

So, as I told you in the previous post, Maza had chewed the Home Theater's cables. Nick wasreluctant to let her out of the cage unsupervised. Me, on the other hand, I could go wherever I wanted. They had no problem because I knew how to behave. He would let me explore any room of the house. Maza did not have any objections. She was equally happy to be on her cage. She liked to spent her time cataloging, storing (and more often than not) eating her nuts and pellets. She also liked to redecorate her cage by moving all her toys from one corner to another.

However, I was starting to feel bad for her. When Nick went to bed and put me to my cage, I would try to talk to her. At first she was ignoring me, but as time was passing by, she started talking back to me. She was shy. After a few conversations with Maza I understood what was wrong with her behavior. It turned out she isn't that bad after all. She is very insecure and she gets easily frightened. That is why she was distant. It's her defense mechanism. She never really knew her family either. Her parents died when she was very young, that's why she ended up in the same cage as me, before Nick found us. However, she barely remembers her family and as a result she idolized her parents. Now that she spent started spending some time with me, she is becoming more social. Nick even let us play together in the living room.

Here is my and Maza playing together!!! I tried to get on top of her and not fall. It was hard because she was moving and I was losing my balance, but in the end I made it! Fun times!

Uh oh! Nick is returning from work. Got to run back to my cage and pretend I am sleeping. I got a lot more to tell your about me and Maza, so check back often!