Monty was brought to Nick's and Ira's home together with Maza. They were 'adopted' early on November. They weren't more than 1 month old, but their exact date of birth is unknown.

Monty is a male long-haired syrian hamster with golden colored fur. When he was adopted he didn't have long fur yet and Nick and Ira where astonished to see his fur grow so much. It was their first hamster after all.

He is very tame and social. He isn't particularly interested in food or treats He likes to run around in the house while behaving himself and not chewing any cabled (unlike Maza). He also likes exploring and climbing on Nick's and Ira's feet. He loves running in his hamster wheel and hamster ball. Monty and Maza had 12 little hamsters together.

Monty went to the Rainbow Bridge suddenly on 05/08/11 after being ill from an unknown illness. Maza was brought to Nick's and Ira's home together with Monty. They were 'adopted' early on November. They weren't more than 1 month old, but their exact date of birth is unknown.

Maza is a short-haired white syrian hamster. When he was adopted he didn't have long fur yet and Nick and Ira where astonished to see his fur grow so much. It was their first hamster after all.

She is very tame and but not much social. She sleeps too much and eats a lot and as a result she is rather large. When she is let out of her house she is always doing mischief. After chewing some cables, she is not allowed to run around the house unsupervised so she spents most of her 'free' time in her hamsterball. She rarely runs on her hamster wheel. Her favorite activity is feeding. She recognizes the noise that ther bag of treats does when it is being held by Ira. When she hears it, she wakes up immediately and runs out of her nest to meet Ira. Monty and Maza had 12 little hamsters together. 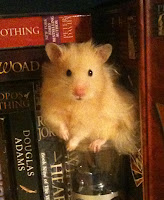 Joshua is Maza and Monty's son. He was one of the two little hamsters that Ira and Nick couldn't find a family to adopt him. As a result he was given to a friendly local pet shop. Unfortunately nobody adpoted those two. When Monty went to the Rainbow Bridge Nick and Ira got him back from the pet shop. (After a few days a family for his brother was found as well).

Joshua is a long-haired golden syrian hamster. He has inherited characteristics from both his mother and father. His fur is simlar to Monty's, but he is more fat that him, more like his mother.

He is tame, but not very social so far. He likes running free around the house and doesn't chew cables (like his father). He also likes eating and hoarding food (like his mother). And he is crazy about his hamster wheel. He spends hours running on it.

Bella joined Joshua and became his girlfriend during Christmas of (15/12/2011). Her exact birthdate is not know, but we assume she was 1 month old when we got her, so her assumed birthdate is 15/11/2011). She is a syrian short haired hamster. Her fur has different patches of color. White, black and brow. He head is black, and the region under her jaw, and her neck is white. She wasn't the most beautiful hamster of the lot, which was why Nick and Ira decided to pick her.She is very kind and quiet. She doesn't bite, even when she was sick and Nick had to administer her antibiotics (which she hated), while resisted she just nimbled his fingers, never even thinking of taking a serious bite out of them.